Talking to Kids about Gender and Sexual Orientation 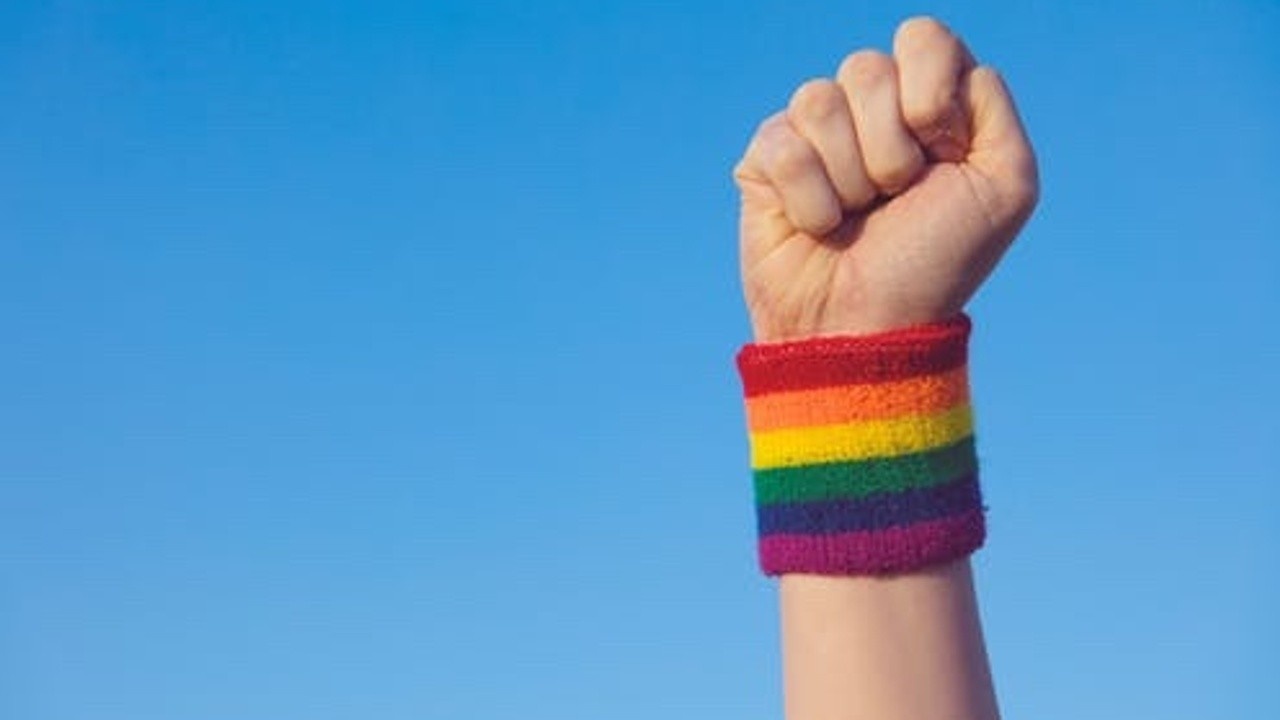 These conversations will change over time, which is why this talk cannot be done only once. A conversation with a 5-year-old will be very different than that with a 15-year-old. Luckily, there are helpful resources (some listed below) to assist parents in how to navigate developmentally appropriate conversations with your children.

Start by thinking about the tone you want to set

You can begin by talking positively about all the diversity that exists in our world – race, ethnicity, gender expression, sexual orientation – and that all these identities make us unique and wonderful people. Look for and point out diversity in nature. There is just as much diversity with people when it comes to our bodies, beliefs, values, likes, dislikes, attractions, identities, etc.

Teach your children to be curious instead of judgmental about diversity. To be kind to others, show respect, and to feel good about who they are.

Talk about Differences in Families

As your kid becomes a part of their school community, they’ll probably come across families that are different from yours. Different families have different cultural traditions, religions, and values. Different families may also have different structures — meaning some kids in school may have 1 parent instead of 2, are being raised by grandparents, or live in foster care or group homes. Some kids have 2 moms or 2 dads, and there are many other types of families.

It’s important for kids to understand that not all families look the same. You can use your values about families and respect to guide talking with your kid about how some families are different from yours and that all families deserve respect.

Gender roles and stereotypes begin early, and as parents, we often perpetuate them unwittingly. Baby girls are often given pink dresses and dolls; baby boys are usually given blue overalls and trucks. Often, we don't even think about it.

To better help our kids, we can encourage them at a young age to pursue their own interests – whether it be dolls or trucks, puzzles or games – and choose their own "play" clothes. The more children feel empowered to make their own choices, the more likely they will come to you later if they have questions.

As parents, you can role-model acceptance of people's differences by what you do and say – and what you don't do or say. For example, when someone makes a comment about a person's looks or sexuality, do you just laugh it off or do you say it was inappropriate? Does your answer depend on who you are with? Your kids are also dealing with these sensitive issues. Ask them what they would do or say if they were being teased. What if they witnessed a friend getting teased, or a classmate they don't know very well? It's human nature to have a range of feelings depending on how closely a situation impacts us. We can teach our kids to be compassionate, when it's appropriate to get involved, and when to ask an adult for help.

Are you familiar with some of the most popular terms?

Learning about the whole spectrum of gender identities – gay, straight, lesbian, bisexual, transgender, non-binary and queer – can help you answer questions from your kids. Amaze.org has a great play list on their youtube channel on this topic. I've also included resources at the end of this post to help you nail this talk. Who do you know that represents another identity than your own that you could talk to?

Transgender means you identify with a different gender from the one you were assigned at birth. Gender nonconforming means your gender identity or expression doesn’t go along with traditional ideas of just male or female — it could mean you identify with words like non-binary, gender queer, or something else. Some people use words like “gender expansive” or “gender creative” to describe children with non-binary gender expressions.

Ally: A person who confronts heterosexism, sexism, homophobia, biphobia, transphobia and heterosexual privilege in themselves and others out of concern for the well-being of LGBTQIA+ people.

Bisexual: A person whose primary sexual and affectional orientation is toward people of the same and other genders, or towards people regardless of their gender.

Cisgender: The prefix cis- means "on this side of" or "not across." A term used to refer to people who's gender and sex are in alignment or match.

Gay: A sexual orientation toward people of the same gender.

Gender: A social construct used to classify a person as a man, woman, or some other identity. Fundamentally different from the sex one is assigned at birth; It can refer to how male or female a person feels or how they identify.

Gender Expression: How one expresses oneself, in terms of dress, mannerisms and/or behaviors that society characterizes as "masculine" or "feminine."

Genderqueer: A person whose gender identity and/or gender expression falls outside of the dominant societal norm for their assigned sex, is beyond genders, or is some combination of them.

Heterosexuality: A sexual orientation in which a person feels physically and emotionally attracted to people of a gender other than their own.

Homosexual/Homosexuality: An outdated term to describe a sexual orientation in which a person feels physically and emotionally attracted to people of the same gender.

Intersex: People who, without medical intervention, develop primary or secondary sex characteristics that do not fit “neatly” into society's definitions of male or female. Many visibly intersex people are mutilated in infancy and early childhood by doctors to make the individual’s sex characteristics conform to society’s idea of what normal bodies should look like. Intersex people are relatively common, although society's denial of their existence has allowed very little room for intersex issues to be discussed publicly.

Lesbian: A woman whose primary sexual orientation is toward people of the same gender.

LGBT: Abbreviation for Lesbian, Gay, Bisexual, and Transgender. An umbrella term used to refer to the community as a whole.

Pan-sexual/Omnisexual: Terms used to describe people who have romantic, sexual or affectionate desire for people of all genders and sexes.

Non-binary: A gender identity that embraces full universe of expressions and ways of being that resonate with an individual. It may be an active resistance to binary gender expectations and/or an intentional creation of new unbounded ideas of self within the world.

Queer: This can include, but is not limited to, gay, lesbian, bisexual, transgender, intersex and asexual people. This term has different meanings to different people. Some still find it offensive, while others reclaim it to encompass the broader sense of history of the gay rights movement. Can also be used as an umbrella term like LGBT, as in "the queer community."

Sex: a categorization based on the appearance of the genitalia at birth.

Sexuality: The components of a person that include their biological sex, sexual orientation, gender identity, sexual practices, etc.

Transgender: Used most often as an umbrella term, some commonly held definitions: 1. Someone whose gender identity or expression does not fit (dominant-group social constructs of) assigned birth sex and gender. 2. A gender outside of the man/woman binary. 3. Having no gender or multiple genders.

Transsexual: A person who lives full-time in a gender different than their assigned birth sex and gender. Some pursue hormones and/or surgery while others do not. Sometimes used to specifically refer to trans people pursuing gender or sex confirmation.

A helpful visual I have used in teaching is the Genderbread Person to explain the difference between sex, gender, sexual expression and orientation and how each is separate from one another. 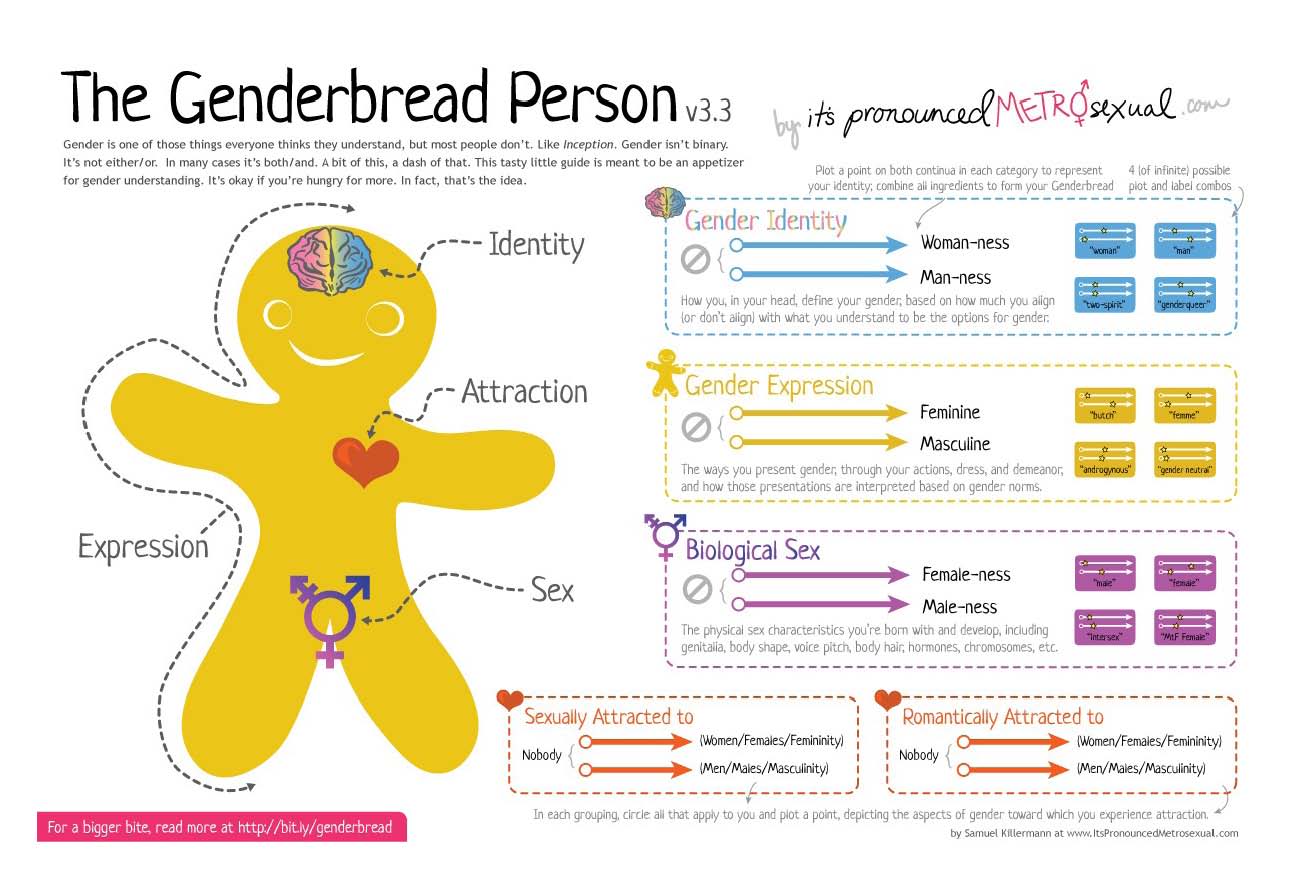 Once you have a basic understanding of the spectrum of non-binary and LGBTQ identities, you can start the conversation with your kids. Ask your child open-ended questions to better understand what they know, think and feel. Let their responses guide your discussion. A few places to start may be while eating dinner together, watching the news or a Netflix movie, or when something related comes up in conversation. Your child may tell you a story about a class mate or a topic they are discussing in school, for example. June is Pride Month, and seeing the various LGBTQ celebrations on the news and in the community may be the perfect opportunity or teachable moment for you to begin conversations about sexual identity with your children.

Discuss homophobia and other forms of discrimination. To watch their language and avoid unkind or derogatory words and comments and instill values of acceptance and kindness.

If your child is not CIS gender or Heterosexual

Exploring how you identify and who you are sexually attracted to is a normal part of childhood development, but for LGBTQA youth, they may not feel like they are part of the norm and often feel alone because of this. This can lead LGBTQA youth toward trying to conform to social norms and hide their authentic selves even to the people closest to them. Feeling like you have to hide your true self can put these young people at risk for suicide, mental health issues, substance abuse and risky sexual behaviors. We also see these youth being victims of violence at higher rates than their peers.

One of the biggest fears we hear from youth is that their parents and important adults in their lives will stop loving them because they are "different." Kids are very sensitive to a lack of support – wherever it comes from. As parents, we can be a buffer to negative talk and prevent long-term negative health outcomes.

Here are some tips on how to talk to and support children about how they may identify.

One startling statistic is the rate of suicide attempts for LGBTQ youth who receive rejection from their families. The Family Acceptance Project in California has researched the impact of family support on gay, lesbian, bisexual, transgender and queer children, teens and adults. Youth who experienced highly rejecting behaviors from their family were eight times more likely to attempt suicide than those who experienced love and acceptance from their parents and caregivers. If you are struggling accepting or coming to terms with your child's identity or orientation please reach out to one of the many amazing organizations listed below to help your family.

No matter where you are in your comfort level or understanding, we're here to help. Kids need to feel safe and loved just as they are. Loving and supporting your kid no matter who they are is the most important thing.